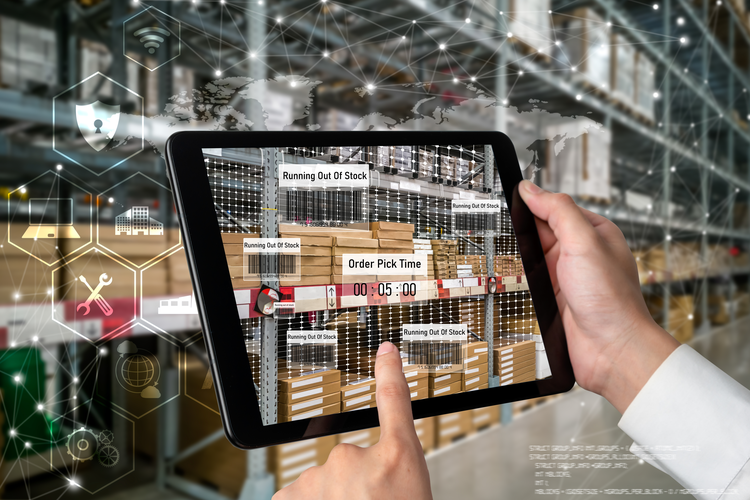 What Is Augmented Reality (AR)?

Augmented Reality (AR) is an interactive experience of a real-world environment where the objects in the real world are enhanced by computer-generated perceptual information, sometimes across multiple sensory modalities, including visual and auditory.

How Does Augmented Reality Work?

Augmented Reality (AR) starts with a camera-equipped device such as a smartphone, a tablet, or smart glasses loaded with AR software. When a user points to the device and looks at an object, the software recognizes it through computer vision technology, analyzing the video stream. The device then downloads information about the thing from the cloud, in much the same way a web browser loads a page via a URL. A fundamental difference is that the AR information is presented in a 3-D “experience” over the object rather than on a 2-D page on a screen. What the user sees, then, is part real and part digital.

Augmented Reality (AR) can provide a view of the real-time data flowing from products and allow users to control them by touchscreen, voice, or gesture. For example, a user might touch a stop button on the digital graphic overlay within an Augmented Reality (AR) experience or say “stop” to send a command via the cloud to a product. An Augmented Reality (AR) headset operator interacting with an industrial robot might see superimposed data about the robot’s performance and gain access to its controls.

As the user moves, the size and orientation of the Augmented Reality (AR) display automatically adjust to the shifting context. New graphical or text information comes into view while other information passes out of sight. In industrial settings, users in different roles, such as a machine operator and a maintenance technician, can look at the same object but be presented with different Augmented Reality (AR) experiences tailored to their needs.

A 3-D digital model resides in the cloud. This model is created using computer-aided design, usually during product development, or technologies that digitize physical objects. The object’s “digital twin” serves as the bridge between the bright thing and the Augmented Reality (AR). The twin then collects information from the product, business systems, and external sources to reflect the product’s current reality. It is the vehicle through which the AR software accurately places and scales up-to-date information on the object. 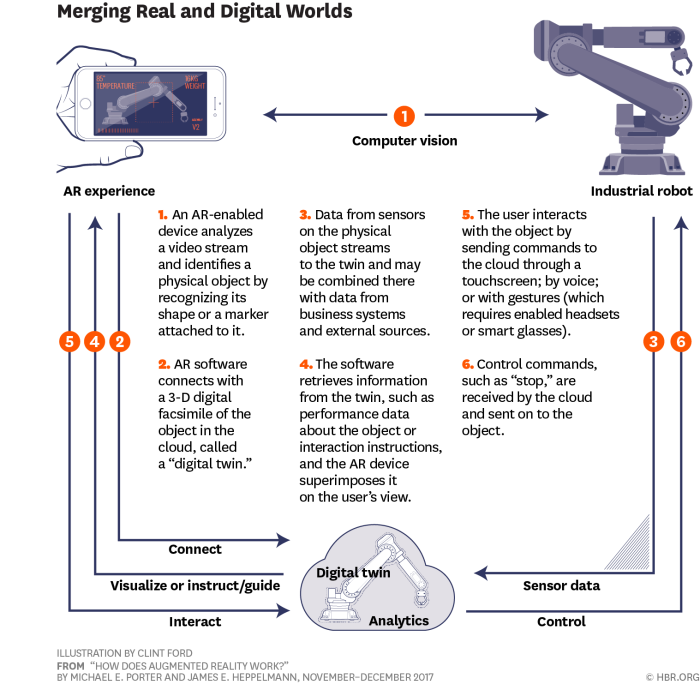 Here is some use case for Augmented Reality (AR) :

Maintenance and industry: AR has a great perspective in the coming years to significantly reduce reliance on physical, technical manuals and improve productivity at the same time by overlaying relevant information in a worker’s field of view while performing maintenance or other tasks. Adequately advanced AR systems can understand the context to show the correct information and help identify components and workflows using highlights and overlays. BMW, for example, is doing precisely that with a pilot program using AR on the assembly line. 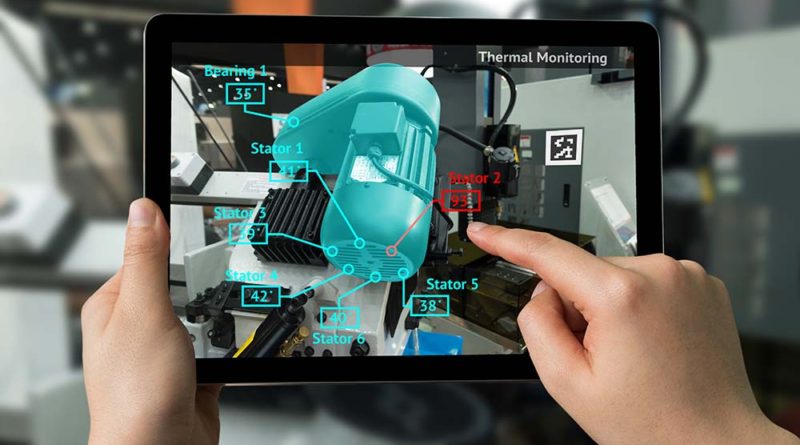 Education: AR is finding its way into the curriculum to enhance traditional learning methods. For example, textbooks can be marked with codes to display additional content or 3D visualizations when scanned by a smartphone. 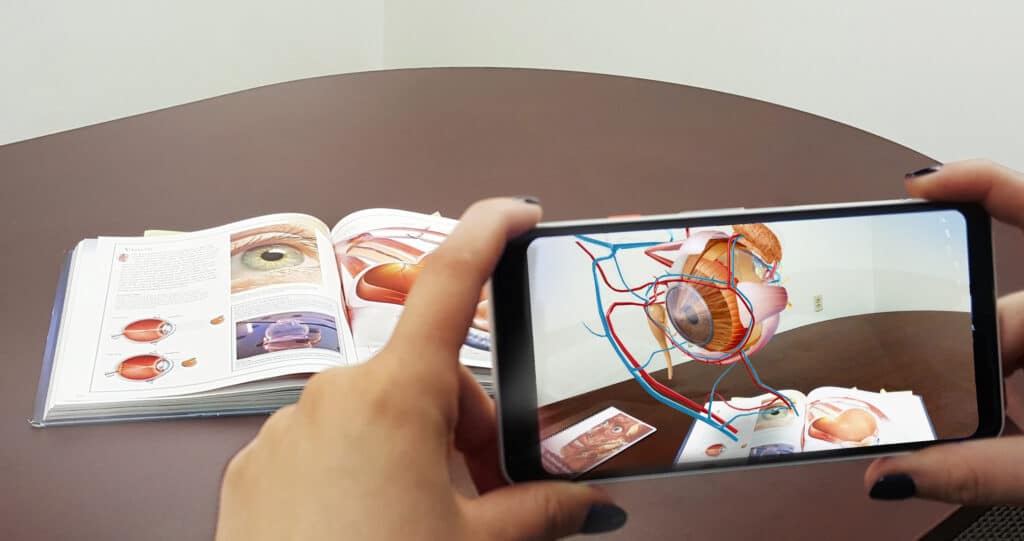 Real Estate: The Internet is the first place where buyers and renters look for properties. AR can help customers experience homes differently and save time. For prospective investors, AR lets showcase properties before they have been built or turn 2D blueprints into interactive 3D visualizations.

Healthcare: The healthcare industry is a Petri dish for augmented and virtual reality business ideas. AR apps are already used for various functions, from helping patients identify their symptoms to enabling surgeons to peer inside a patient’s body without making large incisions. 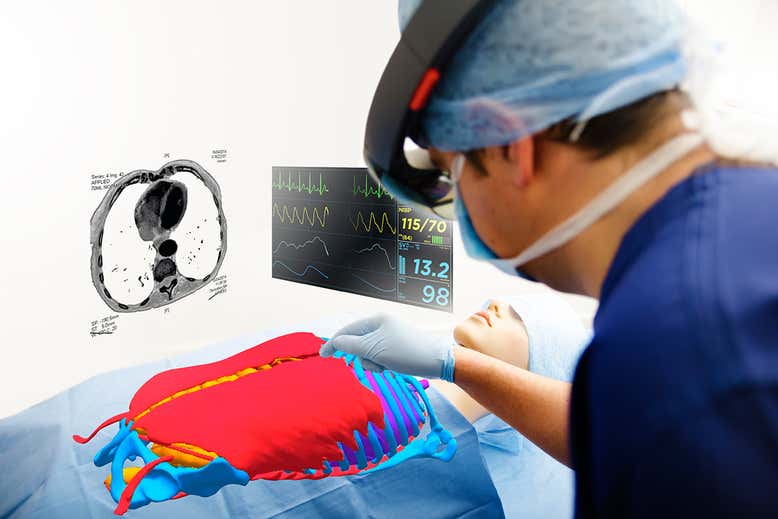 Tourism and Travel: Tourism involves various transportation modes, hotel bookings, hospitality, tours and sightseeing, local experiences like cuisine or festivals, souvenirs, etc. Therefore, the industry abounds with augmented reality business opportunities. Navigation is a clear use-case. Google Maps has got an AR upgrade recently. Users can view the streets through their smartphone’s camera, and the directions appear on their screen. GPS apps powered by AR might show tourist routes, translate the signs on the street, and give sightseeing tips. 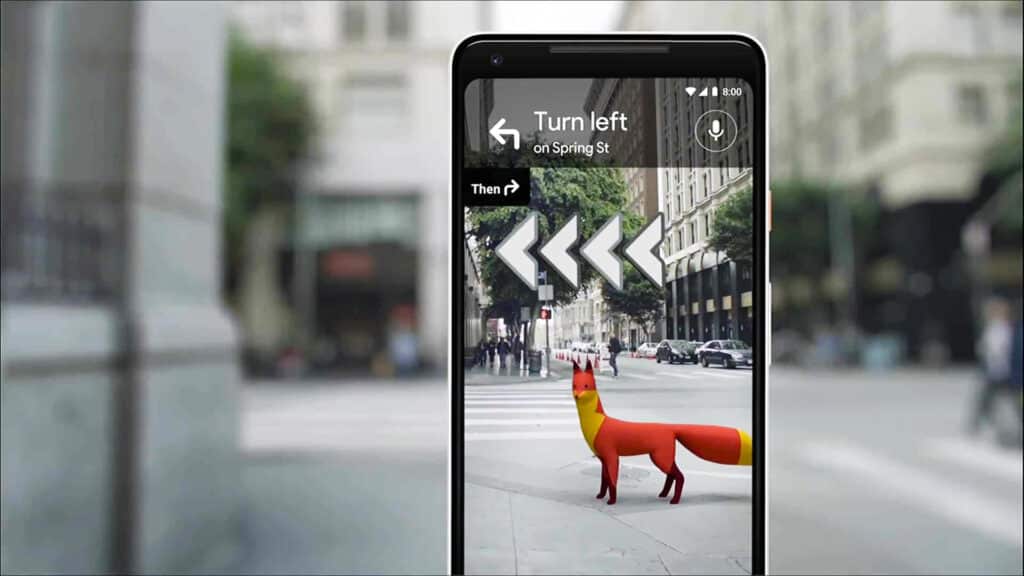 They may seem like similar technologies and certainly have similar shot forms but are fundamentally different. Virtual reality (VR) creates an entirely synthetic virtual world within a headset. As the user, you are placed inside a 3D environment and can then move around and interact with fully computer-generated elements.

AR keeps you grounded in the real world, and it overlays virtual elements as a visual layer within that environment. Immersive AR systems may combine the computer elements with real-world elements with convincing depth, perspective, and other rendering characteristics. The AR system will understand the natural environment well enough to position relevant synthetic elements “in front of” and “behind” natural objects and otherwise be able to interact with the real world in a meaningful way.

Companies and businesses worldwide need to understand the proposed AR and benefit their overall value chain. By utilizing AR technology, organizations are in a better place to differentiate themselves from the competition. In addition, Augmented Reality directly impacts the overall customer experience (CX), which has a longer-term benefit for many businesses.

Convergence Consulting has the skills to help build tailor-made, Augmented Reality applications that can meet your requirements. We understand how best-in-class technologies work and the know-how to implement them to give you a competitive advantage in your business. 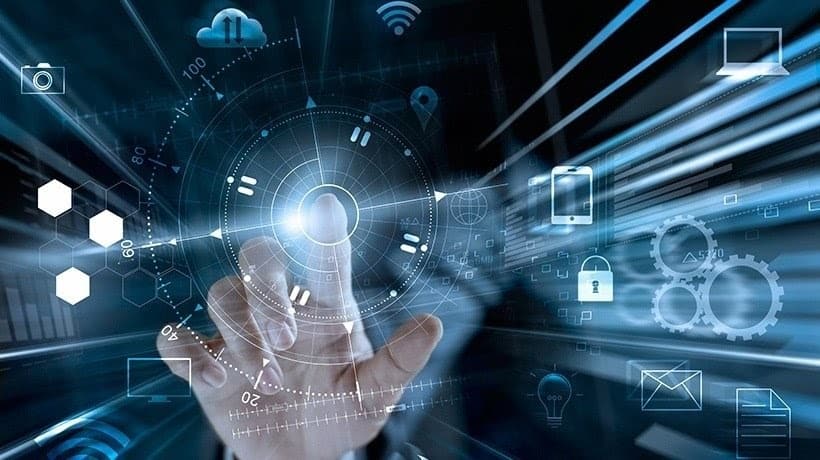 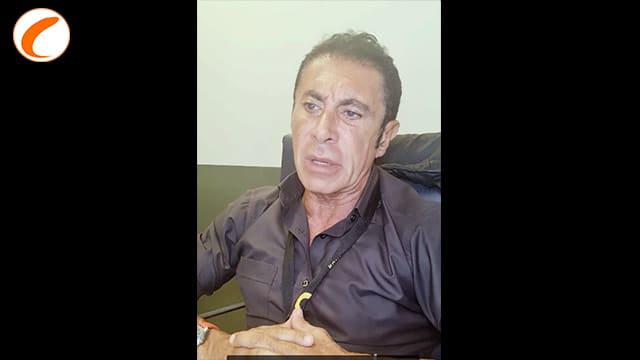 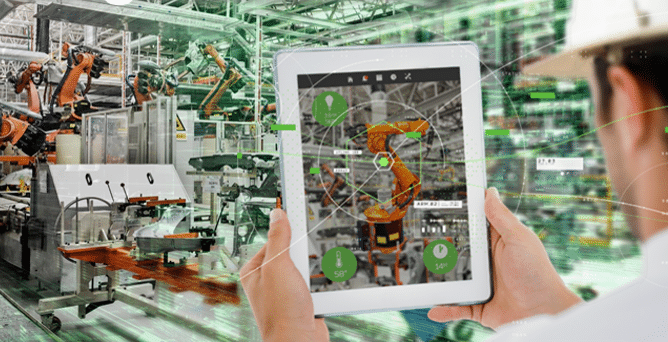 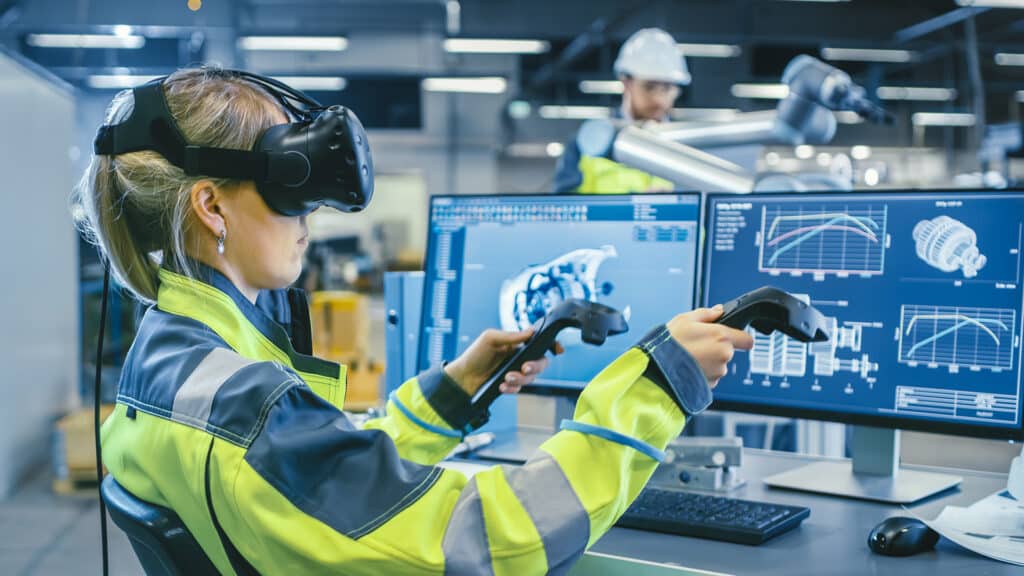 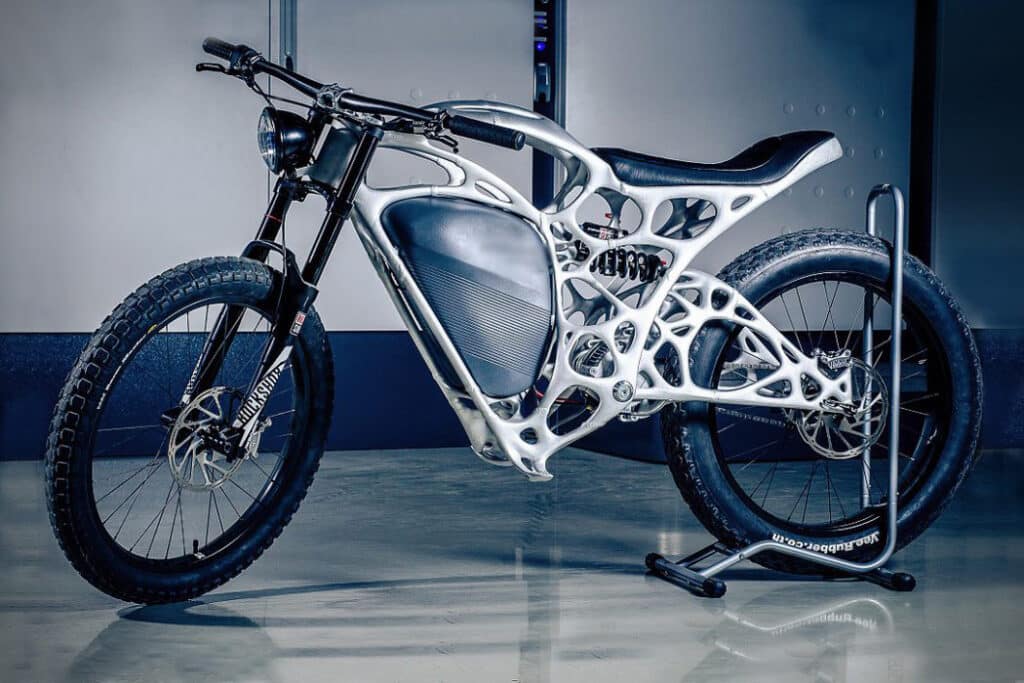